Rocky Books - the stories of a Staffordshire Bull Terrier and his master, Shaun Chapman, in Africa
Rocky Books are great adventure stories for children and adults, with a strong environmental message

The 'Rocky Books' are a series of wonderful books which will bring pleasure to children and adults everywhere. Rocky is a Staffordshire Bull Terrier who really exists – and the books are a glorious fantasy of adventures set mostly in Africa – South Africa, Botswana, Zimbabwe and beyond, where Rocky, a tough little dog, gets into and out of scrapes. In the books Rocky makes friends and enemies of many colourful characters – lions, elephants, hyenas, snakes, bushmen, poachers, politicians and even Hollywood starlets. As the series evolves we see Rocky going as far afield as New York and Alaska.

In this world climate of disaster, every child on the planet needs to be aware of their effect on the environment and the disaster they will soon be facing. The best way is to present it in a strong story format with characters they can identify with. Hopefully the books will motivate the readers in the preservation of existing ecosystems. Schools will find the Rocky books an invaluable tool in environmental education.

The author, Shaun Chapman, is a colourful character himself. Born in Wales of an Irish father and English mother, Shaun has lived in the USA, Australia, New Zealand and other places before discovering his true roots in Africa. In the 1990s Shaun was a ranger with the parks Board in Botswana. Shaun now lives in Johannesburg, where he writes and illustrates his books.

Rocky, Shaun's constant companion, has shared many adventures with Shaun, as well as having some of his own! Rocky was 'dognapped' and beaten once but escaped from his captors. Rocky even saved Shaun from a poisonous snake. Rocky travels round with Shaun, visiting schools, entertaining children and educating them about wildlife and the environment. 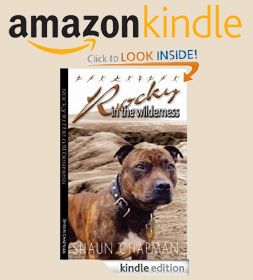